I’ve never had a fruit tree bloom quite like this before!  Doesn’t it know that apples and pumpkins get to be the star now?  It has just really started to cool down here in southern California.  I can almost guarantee that this bloom will fizzle before it bears fruit, but it’s an interesting site in the garden. 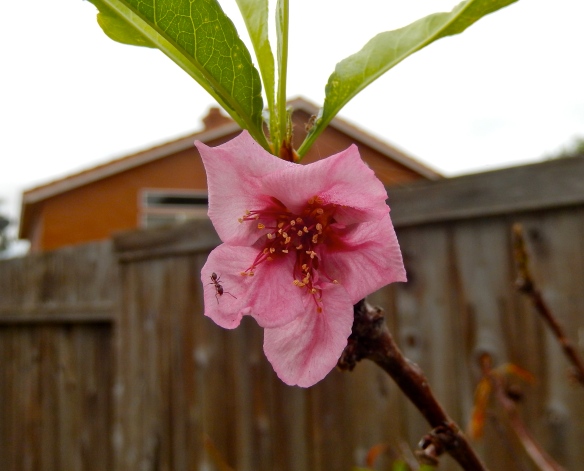 The potted pink mandevilla next to the outdoor fireplace it definitely more sure of itself and I’m happy to report that it’s creeping along the mantel quite nicely, situating itself in the cracks of the stones.

I decided that with my lackluster fruit tree growth this year, I would adopt a technique that I used for the Spice Zee Nectaplum when I planted it this spring and it did fab.  When I planted it, I also planted a two foot long plastic pipe found in the hardware center plumbing section.  I use it to give water directly to the roots deep in this hard, dry soil.  So, I picked up 6 more and carefully dug holes around my already planted fruit trees and positioned them down in the ground.  I also drilled about 4-5 holes in the lower half of the pipe to give water all around.

I’ve been making daily phone calls to my favorite local nursery in anticipation of the arrival of their annual amazing, prolific and Southern California chosen bare root fruit trees. I had to pull out a meek palm in the backyard that always had bug problems, which happened to be behind a picturesque bench, screaming for a fruit tree to grace it’s sweet shadows over it from the summer sun.

I went yesterday with the purpose to buy a Double Delight Nectarine. This will be my second Double Delight since unfortunately the first was planted in what I now know to be one of the barren wastelands in the front yard.  When it did practically nothing for almost two years, I attempted to transplant it, which didn’t turn out so well. When I arrived at Green Thumb Nursery yesterday they were still setting up all of the trees in temporary soil, which was probably a good thing for my wallet and my husband because I only got to see the apple, cherry, almond and nectarine trees. Had all the varieties been poised for sale, who knows what damage I could have done. I do have a Snow Queen nectarine planted January 2013, but she has white flesh, so I had to get a yellow flesh nectarine. I mean come on, it’s obvious, right? When digging the hole we punctured a sprinkler line, but I now have my Double Delight in the ground. I like having a second chance, which the garden allows so many of. And boy is she pretty.

(Photos to come in Spring when it’s not just a stick in the ground.)

The first fruit tree at my home was a peach tree, now about 5 years old and hitting her stride.  I then added a Diana fig a year later and a few citrus (which failed-citrus and I do not mix).  Then last January I bought my first bare-root trees.  A Burgundy Plum and Double Delight Nectarine.  At the time I did a post of my new additions and their planting.  I love bare-roots for two reasons: they’re cheaper and way easier to fit into my car.

Oh!  Gee!  It’s January again!  And I just happened to find myself at my favorite nursery with an amazing selection of bare-root trees from Dave Wilson.  I just went to browse.  Really.  And then I remembered research I’d done on two cherry tree varieties that were just developed a few years ago for mild winters.  Low chill varieties Minnie Royal and Royal Lee.  And……they pollenize each other!   Living on the coast of northern San Diego, we receive anywhere between 200 and 300 chill hours each year.  Fruit trees each have their own hour requirement in order to produce fruit.  So, it’s important in a place like mine to plant varieties considered “low chill”.  Up until Minnie Royal and Royal Lee came out, growing cherries in a warm winter area was not possible.  Until now!

The ONLY reason why I decided to buy these beauties instead of just admire was because of a little orange tag I read attached to each type.  It stated that Mazzard rootstock was used to graft the trees on and it just so happens that this type of rootstock is….wait for it….resistant to root-knot nematodes (see my post about how to identify and get rid of)!  Now that they are in many areas of my edible garden, I figured this would be a great way to manage the problem.  Plus, Mazzard is good for wetter soils, which I have.  As a rule, fruit trees like well drained soils.

But, I couldn’t leave with just two.  Oh no.  A low-chill Gold Kist apricot (300 chilling hours) somehow weaseled it’s way onto my cart!  Now, I’ve heard that apricots are a bit harder to grow than most other fruits (along with apples), but to me they are the holy grail of the backyard orchardist’s collection.  You can buy them at the grocery store or farmer’s market for a very limited time, but I find that usually they are picked to early and are hard and a bit sour.  So I thought I’d give it a whirl.  Ah the things I will do to taste the sweet, juicy flavor of a perfectly ripe fruit.

When I planted the Burgundy Plum and Double Delight Nectarine in my front yard last year, I amended the soil and added homemade organic compost as a mulch on top of the soil (thanks to my sister-in-law).  They seem to be doing fairly well, but haven’t grown much.  The nursery specialist said that the first year you want bare-roots to be focusing on root growth.  The fruit will come in the second or third season.  I decided not to amend my native soil this go-around with the apricot and cherries in my backyard.  I’ve read that some recent studies concluded that adding compost or amendment can cause the water to pool around the roots.  In addition, when the roots grow beyond the amendment and reach the native soil, they tend to turn back around to find that amended soil again.  This can end up forming a huge ball of tightly formed, twisted roots that do not naturally extend outward.  Makes sense.  In order to still provide my beauties with food and nutrients, I’ve decided to use my sister-in-law’s organic compost again as a mulch on top of the soil and then cover that with shredded leaves and grass clippings to keep the good bacteria alive.  In this way the compost will infiltrate the soil over time.  Ok, enough talk, more pictures.

Here’s what the roots of bare-root trees look like! 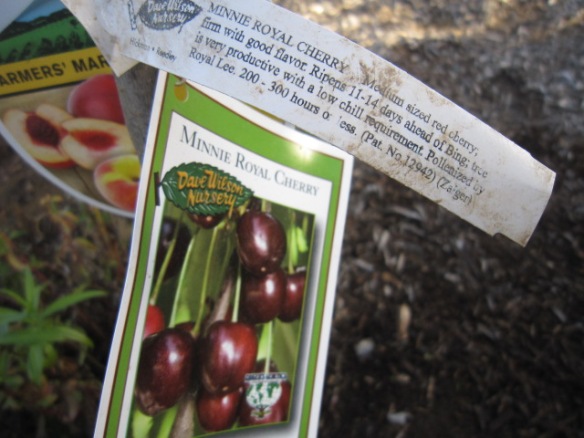 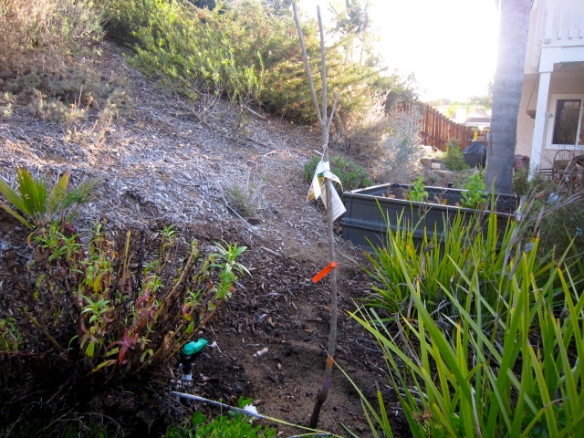 Royal Lee planted in the middle of my main edible bed. This is a south facing area at the bottom of a slope, which receives full sun. It’s the coldest part of the garden, being at the base of a slope, which is great for chill hours.  The Diana fig is in the background.

I haven’t yet planted the apricot, as I’m trying to figure out the best place for it.  I’m running out of space!  We’ll see what I come up with.  On a side note, here’s Henrietta’s before and after. 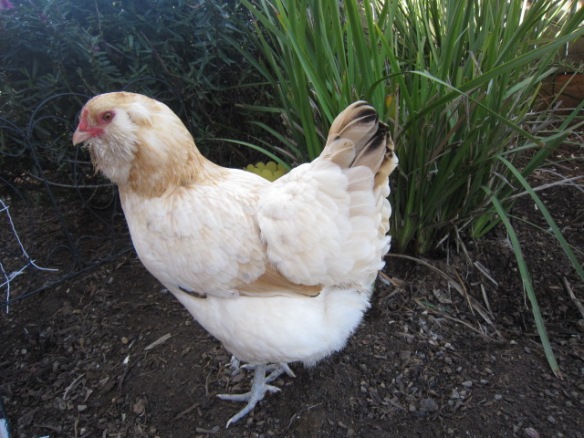 Here she is this morning. Nicely filled out and seemingly lighter in color.

What are you looking for?